We start in London at the Cabinet War Rooms, made even more famous by the recent “Darkest Hour” movie. Step inside the underground labyrinth that hid Churchill and his cabinet as they plotted the downfall of Nazi Germany.

Hitler assumed that the British wouldn’t be crazy enough to stay in the Capital and give out orders so Winston did exactly that. When Victory in Europe was declared, the 400 or so employees emerged up into the street to celebrate with the rest of the country, then had no reason to go back.

Into Kent, site of the Battle of Britain, and Chartwell House where Churchill lived after the war.

We’ll head through Kent to the South East coast and the town of Dover, first line of defence in the Battle of Britain. At the world famous Dover Castle you’ll see how Britain was able to defend itself from European invaders from 1100, through both World Wars and the Cold War, including the secret tunnels where the Battle of Britain was won.On an overnight visit we can also head to the Historic Dockyard at Chatham Maritime, home to the British Navy from 1567 until 1984 – building, maintaining and launching ships through the Dutch invasion in the 1600s, the First and Second World Wars and the Cold War. Chatham is still home to the Royal Engineers who served in Iraq and Afghanistan and their museum in the town is well worth a look. 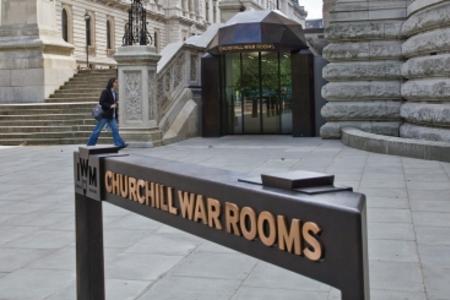